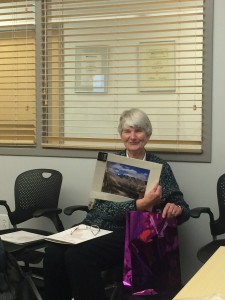 Odette winning one of our door prizes, congratulations Odette!

It was moved by Jan Brummond and seconded by DeAnna Kay Swetzig to accept the minutes of the December 8, 2013 meeting.  Motion carried.  Lin Allen offered a thank you to Betty Brown for having taken those minutes.

Betty won the first door prize of five lovely picture cards and she in turn gave them to our guests Ken and Laurie Dixon.  Marilyn Beattie reminded everyone of our ongoing fund raiser of the note cards.

Jan Brummond gave the treasurer’s report and noted that the additional signatures of new officers had not happened yet at the bank due to various health issues.  There is approximately $9500.00 in the checking account.

The International Convention was discussed and Francis Wardle proposed that our chapter pay the early registration fee for up to 20 attendees.  He made it into a motion and it was seconded by Lin Allen.  Motion carried. 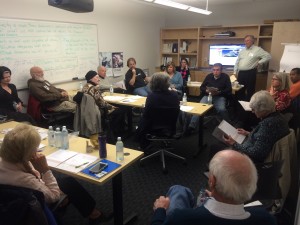 Items concerning the convention were discussed such as group rates on the airlines, all inclusive rates at the Resort, as well as other hotels close by which Co VanHerWaarden will have his nephew check into. An extension to the trip could be made to the Iracambi.  Binka Le Breton (via Skype) said it was best to fly to/from Rio to catch the bus.

An International Board report was given by Francis Wardle.  All monies are secure for this year.  He congratulated Jan for her new position of Treasurer to the International Board. He said that International is working on a national media presentation and hoped we could piggyback on that.  They want to help us get non-restrictive funds.  Also they are concerned about finding a way to keep connected with our “alumni” –those who go on travel grants and then just disappear from the radar and the local chapters.  There is a good balance of officers between the US and South/central America.

It was mentioned that International President Steve Vetter is writing a book for the 50th anniversary of Partners which is being celebrated in 2014.  Lin was able to share about her trip to DC and her talks with him and how rather than asking the question “What do you do?” he asks “How were you formed?”  What experiences made you what you are today?

Co added more thoughts on Steve’s visit to Colorado and how he (Steve) would do whatever it takes to see us succeed with our exchange student plan.  Francis met with the President of Red Rocks Community College and they believe that International Students contribute to their vision of diversity.  Thee is already a relationship between Red Rocks and the School of Mines.

Following a short break and two more door prizes, one an enlarged picture of the Colorado Sand Dunes and the other a Brazilian necklace, were awarded to Odete and Marissa.

Travel grant opportunities were discussed.  There are several from Colorado as well as Minas Gerais who are interested in pursuing this in the next few months.

Co gave a report on 100 K Strong and the need for more members as we set up our committees.  We are excited that Danielle (one of our own) will be going to the Iracambi.

Betty reported that Iracambi is partnered already with Ball State in Indiana.  New member Reed is going to Brazil soon and hopes to get to the Iracambi during this trip.  Betty mentioned the planting of Memorial Trees there as they were able to do for Lou and Maria’s granddaughter.  Binca encouraged us all the “click” the like button to receive grant money from CA Technologies.

Sophia Waechter is bringing us all into the technological/social media era by being our very own techie. Our new e-mail address is: ColoradoPartnersoftheAmericas@gmail.com

Gylton and Louise shared about the Carnival (celebration of life ) held last evening in Ft. Collins   He also told us to put April 29th on our calendars as it is his birthday!!

The next meeting will be June 1st in the Denver area and the September 7th will be in Ft. Collins.

Louise moved and Francis seconded the motion to adjourn.  Motion carried and refreshments followed in the showroom of the BMW facility.